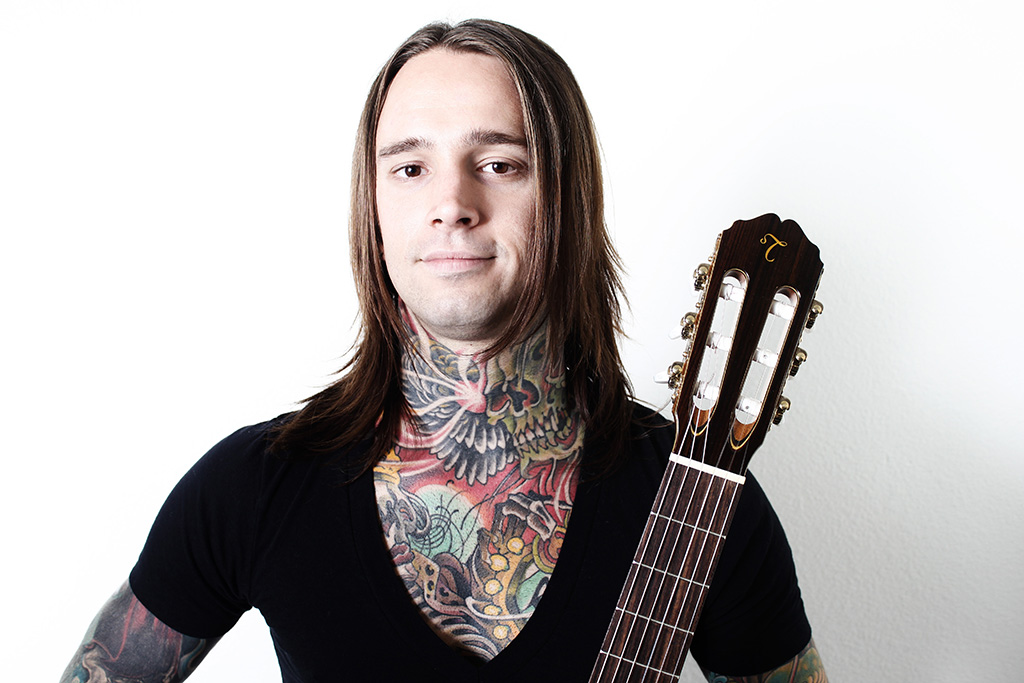 Max Georgiev is rather unique in the Takamine world; he’s taken a bi-directional path as a successful professional musician. Graduating with a degree in classical guitar performance and studying under several world-renowned classical gurus, Max had already won first place in the prestigious “Montreal Guitar Grand Prix”. But Max is equally well known as a session player and touring musician who has shared the stage with rock and metal bands including Black Veil Brides, Asking Alexandria, Simple Plan, Pierce the Veil, Sleeping with Sirens, Memphis May Fire, We Came as Romans, and others.

We caught Max on the phone while on a tour bus… a typical location for this busy and talented player.

So, where are you right now?
I’m heading into Albuquerque, New Mexico with Escape The Fate. I’m their touring bass player. We started a new tour yesterday.

Were you in the market for a new classical guitar at the time?
The way it happened was that last summer, I was doing the Vans Warped Tour, and I knew I was going to get home and have seven weeks off before going out again. "Okay, well, what am I going to do with that time?" The desire to play some Spanish classical guitar was there. I had no set goals for what I wanted to do because I didn’t know any of the details yet at that point. “How fast am I going to be able to put together the repertoire? How much will it cost to go into the studio?” Everything was up in the air.

So, I knew ESP was affiliated with Takamine. Chris Cannella (of ESP) put me in touch with David Vincent (Takamine artist relations manager). I asked David for a guitar for this CD I was going to start preparing. He passed me a loaner, a TC132SC, and it was a model that you could plug in. I returned it before going back out on tour, but I got the whole CD done in that period.

How did it come out?
I showed it to David and to (Takamine director of product development) Tom Watters. They liked it, I’m happy to say.

So was that literally your very first experience playing Takamine?
I had heard the name, but had never tried one. That loaner I got was my first time actually playing one. The action is lower than my former classical guitar, and I prefer it because it hurts my hand less.

When I was getting ready to do that album, I was in it to win it. using the Takamine, I saw the results were going to be there fast if I was going to put the time in. If you’re doing seven hours of classical guitar a day, it helps to have a great guitar. Playing the Takamine was welcoming and warm.

Have you explored more Takamine classical models since then?
I like the Hirade series the best. When a guitar is high-end, that’s instantly what I’m going to go for. But also, I really like that first one they lent me. I ended up using that one for my NAMM clinic at the Takamine booth. At the same time, having one that can be plugged-in versus a good one that can be miked, both aspects are cool, and will sound equally as good in different ways. 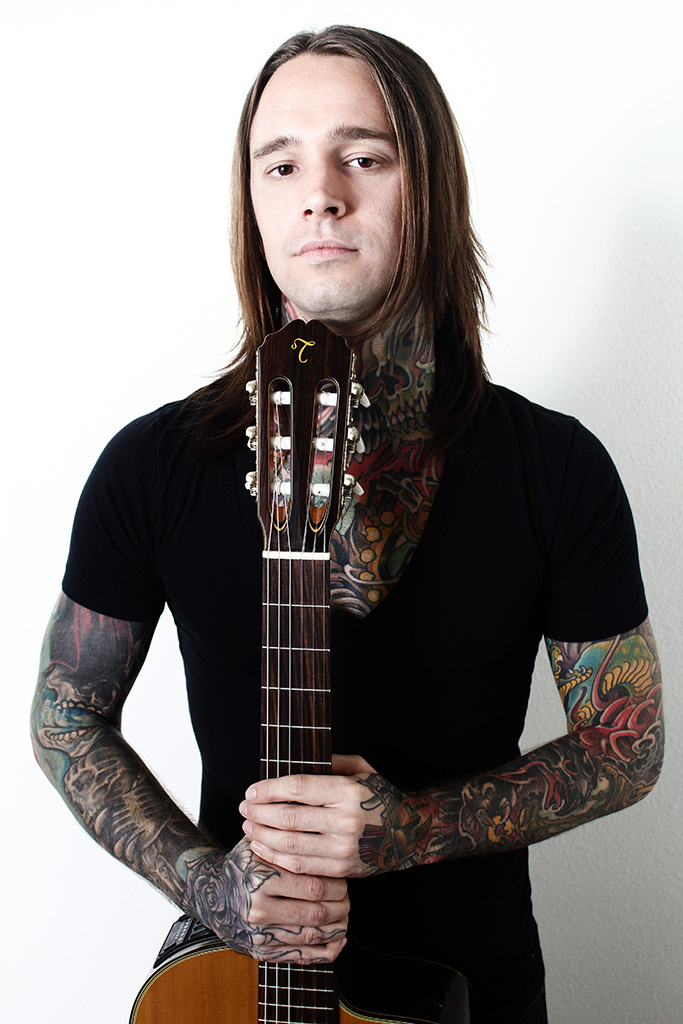 You have this unique set of skills, and get employed as a metal guitarist and bass player while having a classical acoustic background. Tell us about transitioning between multiple genres. Is there a secret?
Mostly through preparation, unfortunately. It’s just a matter of putting in the time.

Playing in a rock or metal band, for me, is a normal thing. A year-round thing. I’m never worried about that. When I have to transition to classical guitar, it takes a certain amount of time. I have to put on fake nails, and run through the pieces a lot. If I don’t run through it for one day, my confidence goes down. It just requires so much accuracy. I just put the time in, and practice in specific ways. I try and have an idea of how much time I’m going to spend that day, which pieces I’m going to look at, and what I’m going to do.

Playing a rock song is much easier. I practice with the CD all the time. It’s like a metronome, and I run through the songs like a set. With Spanish or classical guitar, I have to break down the sections, look at the dynamics, and more. I also film myself doing the song to see where I can improve. That way, I had an idea of what I’d look and sound in the studio. I did that and was shocked at how monotone everything sounded. I was trying to use dynamics, and to play tempo rubato, which means I could be expressive and speed up or slow down in places. When I looked back at all the pieces, I realized that if I wanted these concepts to come through, I’d have to exaggerate those parts of the performance to the fullest. My quiet was as quiet as I could go; my loud as loud as I could go.

And then, once I got into the studio, my only thought was to believe in myself, to know that I was prepared, and to be in the moment.

A lot of people obsess on details regarding the kinds of woods used in an acoustic guitar. Are you focused on specific top woods, back/sides, neck, and fingerboard woods?
No, I’m not. As long as the quality is good, I’m willing to open my mind to it. So many great players play different instruments with materials from all over the world. They all sound good in their own way. So, I try to be open minded. I think that’s important. I think a lot of high-end players would agree.

Most musicians run into that learning plateau, where they’ve become proficient with the instrument but then seem to hit a wall when trying to progress past a certain point. Any advice for them?
The most important thing is that they have to be passionate about it. If not, the results are completely up in the air. It definitely comes down to how much time you put in, and you have to want to put in the time. It comes down to finding your identity. Being open to new things, and being in tune with what you like, and why you like it. Also, getting the right teacher, and having musicians around you who motivate you, will make music exciting and fun. Good things happen when you keep up an overall package of positivity.