By 1989, Takamine had already established a strong foothold in Nashville, thanks to the influence of Steve Wariner and our local Takamine representatives. One morning while reading the entertainment section of a newspaper, I spotted a small photo of a young country artist scheduled to perform at a local dinner club. The photo showed him playing a Takamine. I had already booked my first trip to Nashville but had no particular agenda, so I decided this guy would be my first call. Thus began Takamine’s ridiculously fortunate relationship with one of the greatest entertainers of all time, Garth Brooks.

Fast forward one short year. Garth’s second album No Fences was #1 on Billboard’s Top Country Albums charts and #3 on Billboard’s Top 200, where it would stay in the top 40 for 126 weeks. He had become an international star, all the while playing his Takamine EN15C (similar to the current P3DC). The Takamine cedar top, satin finish cutaway had become an integral part of the Garth Brooks persona -- and the Takamine brand had begun the ride of its life.

In June of 1995, Garth called with an idea. He’d seen a music video featuring an acoustic guitar with a triangular-shaped sound hole, and it triggered thoughts of a custom model. The concept was simple: change the sound hole design of his EN15C from round to the shape of a dreadnaught cutaway itself. When I noted that a guitar-shaped sound hole would not be very traditional, Garth’s reply was, “Neither is a cutaway”.

Of course he was right, and after faxing a series of rough mockups back and forth, the ready, willing and able Takamine factory was working on the first prototypes of what would become Takamine’s second signature model guitar, the Garth Brooks GB7C (incorporating Garth’s favorite number). 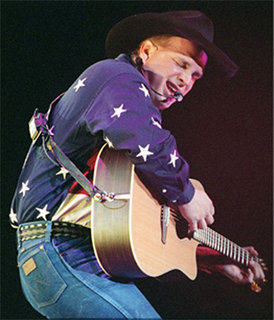 Garth’s much-anticipated tour was scheduled to begin in March of ‘96 with a record-setting five dates at Atlanta’s Omni Coliseum (a record he has since shattered), but the Takamine factory was still working on some unexpected bracing issues presented by the new sound-hole design. With the first show only a few days away, Garth was understandably anxious to see and hear the new model. What he didn’t know was that his previous model had essentially been discontinued, and was unavailable in the configuration he preferred. So, if for any reason the new custom model was not ready in time, or not done properly, there was no plan B, and Garth Brooks would have no acoustic guitar for his biggest tour yet -- at least not a Takamine. On the final day of rehearsal, two finished prototypes of the GB7C arrived and deemed perfect by a very pleased Garth. The relief I felt that day makes for a very vivid memory, and my admiration and gratitude to Takamine as one of the great guitar factories in the world remains as keen today as on that March afternoon in 1996.

2016 marks the 20th anniversary of the Garth Brooks Signature Model. His current three-year tour continues to set attendance records in virtually every city he plays, and is on track to set overall records not likely to be approached, much less broken, by anyone but himself. In the 26 years since our fortunate meeting, Garth Brooks has become as strongly associated with the Takamine GB7C as any artist, to any guitar, ever. Still, his professional value to Takamine remains surpassed by that of his friendship.