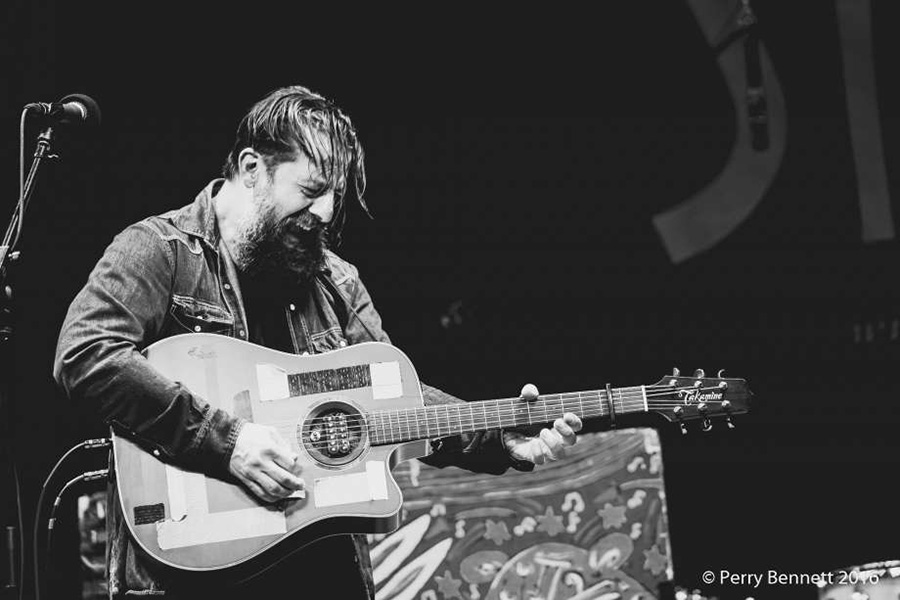 Sean Rowe wanted to do things differently for his fourth album. Rather than looking to his label, he decided to team up with his ever-expanding fan base and launch a Kickstarter campaign to raise the $43,500 needed to record the project at the famed Sam Phillips Studio in Memphis. Quicker than you can say “crushed it”, Sean Rowe fans came up with $50,620, and a grateful and humbled Sean Rowe was making the drive to Memphis, duct-taped Takamine in tow.

Being fans, we invited Sean to swing by our AR locker in Nashville to talk shop. Sean introduced us to Sydney 3, the multi-colored, souped-up Takamine EN10C-AN (antique finish) that he goes nowhere without (Syds 1 and 2 having been retired). If not for its two outputs, feedback-buster-mounted humbucker, nickel flat-wound strings and strategically-placed slabs of multi-colored duct tape on the top, Sydney 3 was just like any other EN10C-AN.

The humbuckers and flat-wounds do provide some sonic options for the solo Rowe, but why the tape? Sean explained that his sometimes enthusiastic percussive renderings on the cedar top had created a few cracks here and there, thus the tape. When asked if he ever planned to have the cracks repaired, he replied, “I’m afraid to mess with it." The tape is actually pretty cool looking, and Sydney 3 has since become part and parcel to Sean’s persona.

As much as Sean loved the hybrid functionality of Sydney 3, he still longed for a nice, warm, straight-ahead acoustic. Somehow a prototype (Thermal Top, rosewood, dreadnought cutaway) made it into Sean’s hands for a test drive. Rather than try to explain the Thermal Top technology in all its molecular glory, we just let him play it. Sean lit it up and the guitar returned the favor. The brand new Takamine sounded like a well-seasoned, vintage instrument... and was soon on its way to Memphis.

To keep tabs on Sean, his new album and where you can catch him live, check out his Facebook page here or website here. Meanwhile, for a great introduction to the essential Sean Rowe, check out this killer performance of Richard Thompson’s "1952 Vincent Black Lightning".