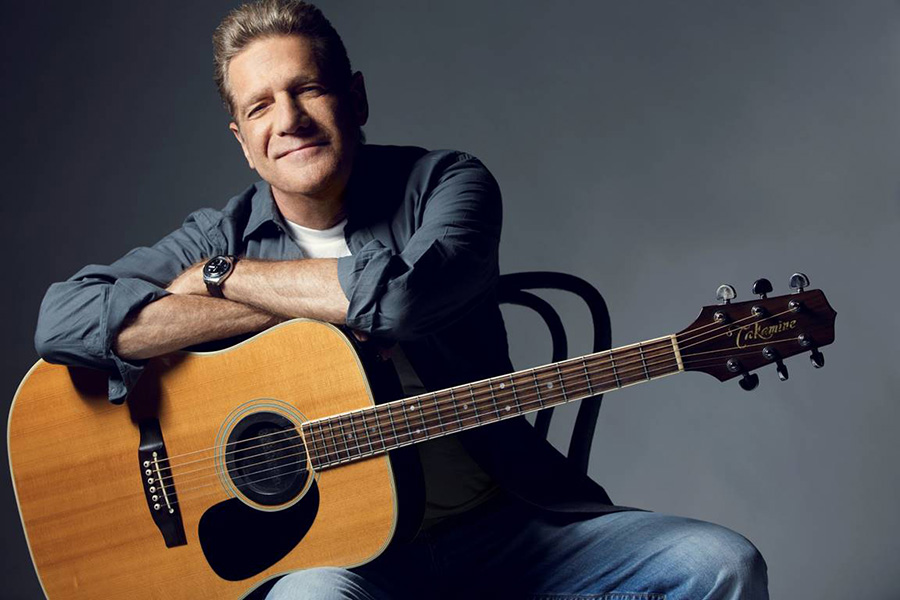 "Take It Easy" was my introduction. Didn’t know his name, but he had the coolest voice I’d ever heard on the radio. The guitars sounded like God and when the harmonies kicked in, I was atomically reorganized. I bought that first Eagles album but no singing credits were listed. Took me a while to find out that cool voice belonged to a guy named Glenn Frey.

Fast forward 20 years. Bobby Thompson, founder of North Hollywood’s Third Encore, Nashville’s Soundcheck, and ex-Eagles tour-dog is driving me to the Frey home in Los Angeles. Seems Glenn was a longtime Takamine fan and wanted to talk guitars. We were introduced and for the next hour, sitting around his kitchen table, that’s what we did.

He told me how he’d been turned on to Takamine around 1980 by Fred Walecki of Westwood Music in LA and how prior to that, playing acoustic live meant wrestling with mic feedback or tolerating crappy-sounding soundhole pickups. Takamine had just come out with its revolutionary Palathetic pickup, and Fred suspected it might be the solution to Glenn’s dilemma. Fred was right, and Glenn became one of the first major artists ever to perform with the new acoustic-electric Takamine. By 1982, artists like David Lindley, Jackson Browne, Ry Cooder, Steve Lukather, and Nancy Wilson were appearing along with Glenn in Takamine’s domestic catalog. A rare circa-1982 photograph shows Glenn being presented an early Palathetic pickup model PT-015-ST by Takamine’s now legendary leader and master luthier, Mass Hirade. 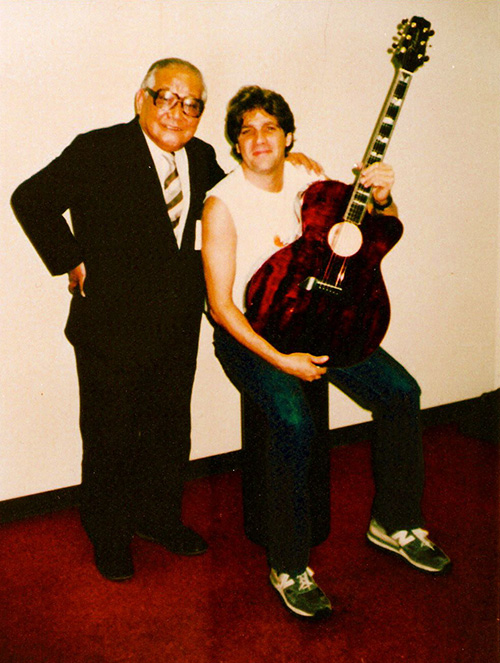 Our meeting in 1991 renewed that relationship, and Glenn was supplied with several new guitars including an EF360S (similar to Takamine's current EF360SC, minus the cutaway) that he would come to refer to as "Number One". That guitar would serve as Glenn’s primary six-string from then on, and eventually become the template for his EF360GF signature model.

With the advent of the Eagles' Hell Freezes Over reunion tour in 1994, Glenn would require more acoustics to accommodate the band’s ever-expanding set list. A viewing of that classic "Unplugged" performance shows Glenn, Don Henley, Joe Walsh and Don Felder all playing a series of Takamine guitars, including two EC132SC classical models played by Felder and Walsh for their pared-down acoustic version of "Hotel California". That ongoing need for acoustics, along with my previous associations with Henley and Schmit during their solo careers, afforded me daily access to the three weeks of Hell Freezes Over tour rehearsals… and some of the most treasured memories of my career. Listening to them work out vocal harmonies a capella, seeing their legendary work ethic up-close, and perhaps most vividly, witnessing the respect and support afforded by band and crew to a freshly-recovering Joe Walsh. I still get chills remembering a sober and nervous Joe knocking it out of the park during that first live reunion performance.

The Hell Freezes Over tour was a huge success, and extended right up until the band’s release of their double-album Long Road Out of Eden. It was at this time that Glenn and his longtime guitar tech Victor Rodriguez began discussing the idea of having a clone built of "Number One" to serve a backup. That opened the door to the idea of creating an honest Glenn Frey signature model. Glenn liked the idea, and soon principals from the Takamine factory were documenting every square centimeter of "Number One", determined to replicate the magic Glenn found in that particular guitar. Frey’s take on this process was documented in a May 2009 article by Premier Guitar’s Gayla Drake. She writes:

I got to talk with Frey between cities on a recent leg of the Eagles’ North American tour. He’s clearly very excited about the guitar, very proud of it, and it’s proving to be as great on stage as his original, which he affectionately calls his Number One. “It’s warm,” he says, “but especially for playing live it’s important to have a guitar with a distinct high end and not too many overtones in the low and mid ranges. That’s a great sound for sitting in your living room, but a live sound engineer has to squash it. For mixing live, it’s better to have a guitar that’s perfect mid-to top, because you can always add lows. That switches the posture from defensive mixing— taking something away from the guitar—to adding to it in order to fill a few things out.”  Frey continued, “Some designers and engineers from Takamine took my Number One for a couple days and made extensive measurements of every part of the guitar, from the thickness of the top and exact placement of the braces, to the thickness of the finish—everything about it.” After making copious notes, they returned to the factory to make two prototypes: one exactly like the original with a laminated back, and one with a solid back. Frey decided he liked the solid back best, so that became the Glenn Frey model. Regarding the almost Spartan simplicity of the instrument, Frey said it was important to him to keep the guitar affordable as well as extremely functional. The key for him was sound and usefulness. He explained that, “the finish and inlay and bells and whistles don’t have anything to do with that. We took a pretty straightforward approach to it; the only thing it has is the little ‘GF’ on the headstock. I’ve had ten or twelve of these in my hands, and they all sounded great and needed very little set up.”

And so, as signature model guitars go, Glenn Frey’s EF360GF is about as genuine as they come. It quickly became one of Takamine’s best-selling models and remains so to this day. Glenn took great pride in its authenticity, a point that will serve as an endless source of pride for Takamine. It was an amazing honor and privilege to have known and worked with the great Glenn Frey.