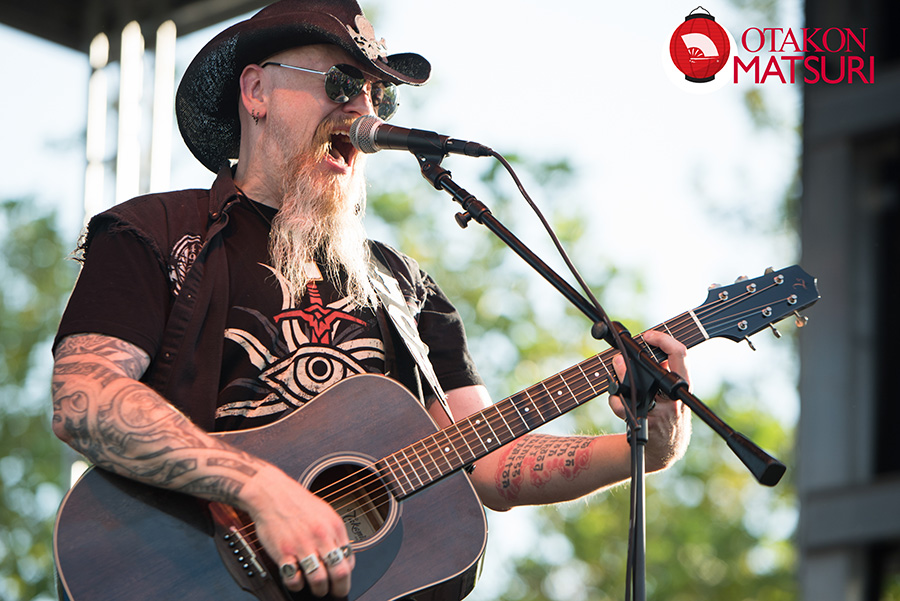 We caught up with talented singer-songwriter (and Takamine player) Jason Charles Miller as he was heading into Nashville for some shows. This busy musician has taken an interesting path into his current gig of performing his own songs as a solo artist. Originally coming to prominence as the frontman of industrial rock band Godhead, Jason took a turn toward an ongoing successful career as a voiceover artist for film, TV, and video games. In the late 2000s, Jason’s passion for more traditional country and blues-based music influenced this LA-based singer/guitarist to move in the musical direction he’s stayed ever since.

What are you doing in Nashville, Jason?
I’m going to be performing with Billy Ray Cyrus tomorrow night. I co-produced his new album Thin Line, which comes out September 9th. I co-produced seven songs with Stewart Cararas, and we worked on 10 of them in one capacity or another. Billy Ray’s playing a fundraiser for “Musicians on Call” tomorrow, and he asked me to come sing a couple of the songs that I worked on with him.

Then, on Wednesday night, I’m playing at a crazy event they call the “Music Row Freak Show”. It’s a show for the cool Nashville songwriters… the people who aren’t afraid to take risks. They’re all adventurous songwriters, so of course I'm friends with as many of them as they will allow me to be!

We assume you have your Takamine with you.
Yes, I brought my EF360 TT that Takamine has customized for me in a black finish.

Have you always been a dreadnought guy?
Yes. I’m a rhythm player primarily. I’ve often joked that if anyone at Takamine or ESP heard me play a lead, they’d take my endorsement away immediately. But yes, the bigger the body, the better. The black finish they did for me on this TT looks really cool. It’s see-through black on top, and black satin on the back and sides.

Do you recall when you first discovered Takamine guitars?
Here’s my Takamine story. I always knew that Takamine existed as a company, but for whatever reason, I just never picked one up. It was just one of those brands, and I’m sure everyone understands this, that I just never had played.

Due to my relationship with ESP Guitars that goes back to 2001, here were these guitars available for me to try after ESP took over US distribution of Takamine in 2015. I picked one up and said, “Where have these been all my life?”

I was instantly sold. I bought my first one. They didn’t give me one; I bought it. I record with it, and I used a bunch of it on Billy Ray’s new album, and on my new album.

What was your first impression of the Thermal Top guitar?
First, I was amazed at how light they were. Then I was impressed with how bright they are but still classic sounding. It all goes hand in hand, with the technique that they use, baking the tops. I have gotten so many compliments at live shows from guitar players that I trust and respect. They go, “Wow, that thing sounds awesome!” That’s a cool feeling to have, and more and more people are waking up to how cool these Takamines are. I’m proud to be an ambassador for the brand.

What’s important to you in an acoustic-electric guitar?
The first thing is how it feels in my hand. The nut width. That may seem strange, but I have large hands, so I have to make sure that my fingers have space. I love the Takamine’s thickness of the back of the neck. I prefer necks with a V shape… not flat. I want it to really feel it when I play, like Babe Ruth’s baseball bat. So that’s number one.

After that, obviously what’s important is sound quality. What pickup is in it? How well does that pickup transfer the purity of the sound of me strumming it alone in a room, to a club or bigger stage environment?

Have you found that the “sound in the room” translates well to your stage sound with your Takamine?
Yes, it translates really well. The Takamines don’t feed back, which is really nice. I can really hear the note separation and brightness springing back at me with a good monitor mix.

Also, there’s the sound of an acoustic guitar that we, as listeners, have grown up hearing and are used to. No matter what style, that sound of a guitar is classic and I think our brain responds to it in a unique and familiar way.

Are there specific things you turn to acoustic guitar for as a songwriter?
Yes, absolutely. When you have a really nice sounding guitar, it makes your job easier. You’re not thinking about anything but making the song go. You’re just creating. A really nice sounding acoustic guitar, intonated properly, makes you pick out some creative chord choices you might not have picked otherwise.