Toby Keith is true to his convictions. When Nashville record labels told the young Oklahoma upstart that his songs needed work and sent him home, Toby regrouped, took the exact same songs to another label, where they became monster hits on his million-selling, self-titled debut album. Later, well into his successful career, another sage label exec informed Toby the album he’d just written “had no hits”. Toby bought out his contract, sold it for twice as much to a competing label, where the album struck gold and the single “How Do You Like Me Now” parked at number-one for five weeks. Similarly, when the unapologetically patriotic Keith was asked once why the mezcal brand he established was distilled in Mexico, and the acoustic guitar he played was built in Japan, his reply was, “Show me who makes 'em better and I’ll switch."

Like his signature model predecessors Steve, Garth, John, Glenn, and Kenny, Toby was a Takamine player from very early on. Even while working the Oklahoma oil fields by day, Toby and Takamine were fronting his popular bar band at night. So when the new kid in town needed an acoustic-electric to support his freshly-minted record deal, it was the Takamine guy he wanted to talk to. Luckily his new manager T.K. Kimbrell (formerly with Steve Wariner) knew just where to find me. 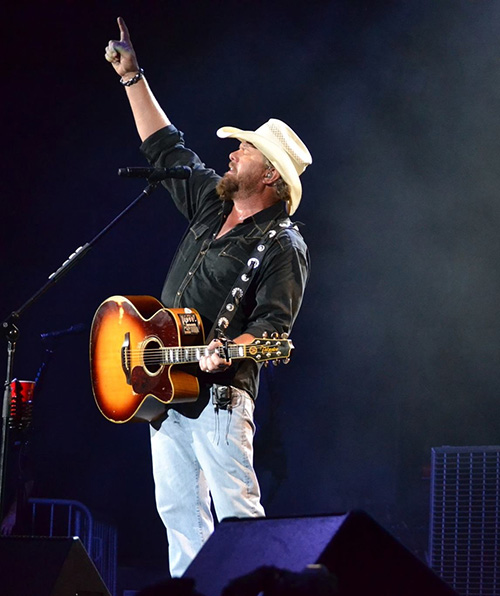 It was the ever-popular EF341SC that Toby chose as his go-to acoustic, and so it remained for the next 12 years. It wasn’t until we surprised him before a show in Hartford with an EF250SMCSB (similar to the current P6JC) that Toby turned his back on the black dreadnought cutaway. He took one look at that tobacco-burst jumbo cutaway, strapped it on, hit the stage and never looked back.

Late in 2011, talks of developing a Toby Keith signature model began. Toby’s career was already inexorably intertwined with the Takamine brand. Even the Ford Truck commercials and promo materials starring Toby featured his Takamine by default. So Toby’s inclusion on Takamine’s signature model Mount Rushmore was a natural.

Two things regarding this new model were clear from the beginning. First, the guitar would be based on the EF250SMCSB sunburst maple jumbo cutaway that Toby had become very comfortable with – secondly, we would be keeping it pretty simple. The only additions to his existing model would be an oval silhouette icon just above the nut, mother of pearl block fretboard inlays, and a small engraved signature on the heel cap. As such, the EF250TK Toby Keith Signature model would represent the quintessential Takamine solid spruce top, flame maple, sunburst jumbo cutaway. It would, of course, feature the Palathetic pickup along with Toby’s preamp of choice, the CT4BII.

The first prototype EF250TK Signature model was delivered to Toby in late 2012. It was immediately restrung by longtime tech Ripp Mayes (who was key in developing the model) with a set of 13 -56 phosphor bronze strings, strapped up, dropped over Toby’s shoulder, where the now well-worn, well-played EF250TK proto can still be seen with Toby, night after night, show after show.

Whether it’s the booming baritone, sometimes-outspoken country superstar who appears in countless music videos, Ford Truck ads, or the occasional cover of Forbes magazine – or the less-familiar husband of 32 years, devoted father of three, veteran of thirteen USO tours, and founder of the Toby Keith Foundation, providing cost-free and comfortable homes for pediatric cancer patients – Toby Keith is the real deal... an enormously gifted champion of life, with a rock-solid sense of self, duty and community.

Takamine Guitars is extremely proud to be associated with Toby Keith.