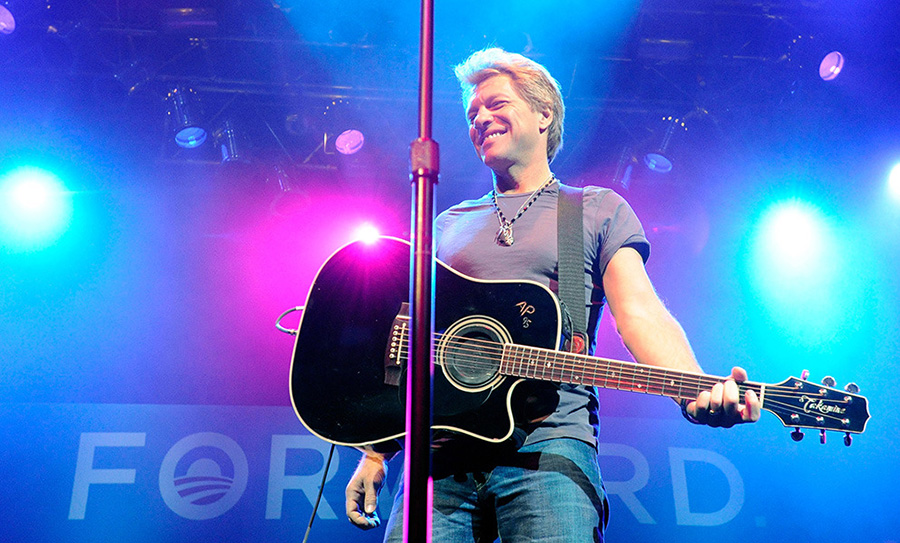 Back in January of 2016 we reported that Bon Jovi was getting back to basics and recording their 13th album at the famed Power Station Studios in New York, where the Jon once swept floors. That album, This House is Not for Sale was released the following spring, and entered the charts at #1. Currently, Jon and band are two months deep into a major run of live arena dates in support of that album.

Accompanying Jon on that tour, as with every Bon Jovi tour for the last 23 years, is a Takamine model EF341SC, serial number 94100642, that he purchased from a New Jersey music store in 1994. Jon's guitar famously pays tribute to his childhood neighbor and guitar teacher, Al Parinello, who passed away the following year in 1995 and accounts for the now-familiar “AP 95” that Jon etched with a pocket knife into the upper bout of that black Takamine.

The EF341SC remains one of the most popular Takamine guitars, for good reason. Part of our Legacy Series, the guitar is handcrafted in our Japan-based pro series facility with a solid cedar top and maple back and sides, and is ready for the stage with our Palathetic™ under-saddle pickup for peerless amplified response and highly-acclaimed CT4B II preamp system with three-band EQ, volume control and built-in tuner.

While Jon's guitar rack holds several other Takamines tuned and ready to go, the father of four from Sayreville, New Jersey who is still married to his high school sweetheart remains most comfortable in the spotlight with his beloved “AP” guitar.