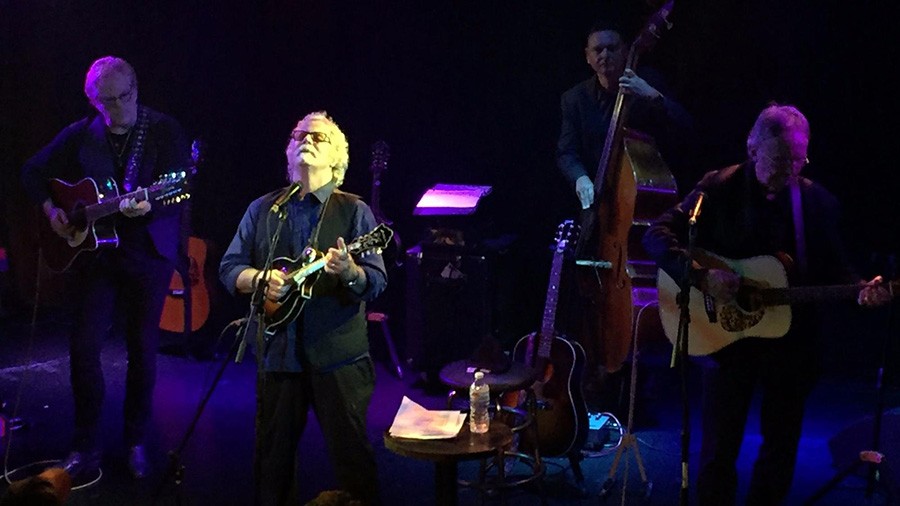 It was supposed to be an album release bash for a key member of several influential bands, not a posthumous salute to one of his most admired disciples.

But circumstances were such that Chris Hillman’s homecoming show Monday night at the Troubadour in West Hollywood became both a hard-won late-career celebration for him, and a heartfelt homage to Tom Petty, who produced Hillman’s new album, “Bidin’ My Time.”

“This show is for Tom,” said Hillman, one of the founding members of the Byrds, and one of the primary influences from the get-go for Petty and the squad of Florida musicians who, a decade after the Byrds helped invent folk-rock, would come together in Los Angeles as the Heartbreakers.

The Byrds, which would represent a career peak for any musician, were just the beginning for Hillman, 72. He went on to start the pioneering country-rock band the Flying Burrito Brothers with Gram Parsons.

From there, he joined Stephen Stills in Manassas, and subsequently teamed with two more respected L.A.-based singer-songwriters — J.D. Souther and Richie Furay — in the Souther-Hillman-Furay Band. Eventually, he reconnected with two of his Byrds alums for McGuinn, Clark & Hillman before finally fronting a band of his own in the ’80s with the progressive country group the Desert Rose Band.

Hillman touches most of those bases on the around-the-horn album Petty guided. Hillman was joined Monday by his longtime collaborator, singer and guitarist, Herb Pedersen, along with singer and multi-instrumentalist John Jorgenson. Together, they constituted three-fifths of the old Desert Rose Band lineup. Rounding out the team at Monday’s show was Nashville bassist Mark Fain.

The setting of the Troubadour itself added to the emotional and historical significance of the performance.

“The Byrds played their very first show on this stage,” Hillman noted, a little after pointing out that he and Pedersen — both in bluegrass bands at the time — first met at the club in the early ’60s, when the it was a hub of the folk music revival.

Indeed, folk music was something of a religion for many of its adherents, and in a recent interview with The Times, Hillman recalled first encountering an upstart player who had moved west from New York and who shocked folk purists in 1964 when he showed up one night at the Troubadour playing — horror of horrors — a Beatles song.

That was Roger McGuinn, who then was still going by his given name, Jim. Soon, several players who were regularly congregating at the Troubadour — Hillman, David Crosby, Gene Clark and Michael Clarke — would launch the band that brought the Beatles pop songwriting savvy and innovative vocal harmonies together with the lyric richness and narrative storytelling of folk and bluegrass.

Hillman paid homage to the Byrds with re-imagined acoustic renderings of three of their signature numbers, “The Bells of Rhymney,” “Turn! Turn! Turn!” and “Eight Miles High,” the latter demonstrating just how far from bluegrass it wasn’t, at least not when you strip away the electric guitars, bass, drums and early psychedelic rock production from the Byrds’ original recording.

Another musician with a powerful and important connection to the Troubadour — lyricist Bernie Taupin, Elton John’s longtime songwriter partner — looked on approvingly from the club’s balcony, 47 years after John’s star exploded in the same room.

“I always felt that Chris has kind of flown under the radar of most people,” Taupin said shortly before their set began. “But I also thought he was the second-best songwriter in the Byrds, next to Gene Clark.”

In fact, during the show, Hillman saluted his former bandmate, saying, “We all strived to write as good as Gene did,” by way of introducing his arrangement of Clark’s achingly beautiful “She Don’t Care About Time,” which Hillman included on “Bidin’ My Time.”

He also tipped his hat to Parsons, who died in 1973, with “Sin City,” a Burrito Brothers number he said they first sang together on the Troubadour stage in 1969.
Hillman’s sweet tenor voice is as fluid and expressive as ever, and it blends hauntingly with the piercing purity of Pedersen’s voice, making it no surprise that they’ve returned to one another’s company so often for more than half a century.

That was highlighted in exquisite two-part harmonies when they paid tribute to their own influences, including the Everly Brothers (“Walk Right Back”), the Louvin Brothers (“If I Could Only Win Your Love”) and the Stanley Brothers (“The Rank Stranger”).

When Jorgenson joined in on multiple numbers, the three-part harmonies induced goosebumps all around.

Generous collaborator that he’s always been, Hillman ceded the spotlight to Pedersen and Jorgenson on several instances. But this was Hillman’s moment, and he commanded it easily, and with no hint of braggadocio that anyone with a comparable musical resume might exhibit.

That is one of the things he and Petty had in common. Although both were certifiable rock stars, and both are in the Rock and Roll Hall of Fame, Hillman and Petty by and large sidestepped the egotism that can accompany the degree of success both achieved.

Indeed, Hillman, like Petty, remains subservient to his music, something that was evident in what was arguably the musical and emotional high point of Monday’s 100-minute set: Hillman’s version of Petty’s song “Wildflowers,” the closing track on “Bidin’ My Time.”

The gentle arrangement built on Hillman and Pedersen’s acoustic six-string guitars. Meanwhile, Jorgenson’s mandolin and Fain’s bass accented the song’s roots in folk music as Hillman sang what came across as an elegy to a departed friend: “You belong among the wildflowers/You belong somewhere close to me/Far away from your trouble and worries/You belong somewhere you feel free.”