Born in Kijabe, Kenya, singer-songwriter Naomi Wachira made her way to the United States to attend college and eventually ended up in Seattle, where she immersed herself in the vibrant music scene of the Pacific Northwest. Fusing African rhythms, American folk, reggae and soul, Naomi was chosen by the Seattle Weekly as the “Best Folk Singer in Seattle”. Since then, she and her Takamine guitars have entertained fans around the world with her thought-provoking, evocative, and beautiful music.

Do you recall when you first heard of Takamine Guitars?
Ooooh, yes. A Takamine was the the first guitar I ever bought.

When was that?
This was in 2006. I just went into Guitar Center and was playing around with different guitars, and the Takamine was one that spoke to me. I also know that one of my friends owned one and I’d liked the sound of it, so that’s what I had in mind.

What model was that first guitar?
I can’t remember the model, but it was a steel string. I didn’t start playing nylon string guitars until 2014 when Damien Jurado suggested that I look into playing classical-style guitars. He said, “The sound of it with your voice will complement each other.”

We know you just had a touring musician’s nightmare happen when an airline broke your favorite Takamine. Before we get to that sad story, tell us how you first got “Estella”.
It's really sweet story because David (Vincent, Takamine artist relations) had come to see me on the road in Nashville back in 2014. He mentioned that when he heard my voice, he knew exactly what guitar belonged to me and it was his personal nylon string, which I named Estella. It was the most incredible gift that anyone could give me. As soon as I held it, I felt like it was made for me.

So there you were last year, on tour of Europe…
I arrived in Italy and picked up the guitar. It was the first day of the tour.

Oh no.
I took it out and started to tune it, and felt like something was wrong. I looked down and saw there was a huge crack in it. 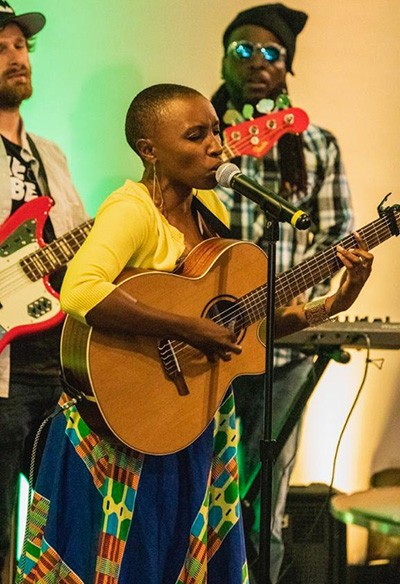 That is just terrible. What did you do?
Well, I was touring with Damien Jurado, and fortunately they had an extra guitar. But it just didn't feel right. When I’m playing someone else’s guitar, I don’t feel like I am in my space. The second day, I went to Josh Gordon, who plays guitar for Damien, and said, “Can we doctor this in any way?” We literally took guerrilla tape and fixed it as best we could, and that’s how I played for two weeks. It's still heartbreaking whenever I think about her.

Now that you’re back in the States, you also have your other Pro Series Takamine, the P3FCN. How has that been working out for you?
I really like it. I’m still trying to get into a groove with it, but I love the way it sounds. It’s has a really warm and intimate sound. I am so, so grateful to Takamine for stepping in and helping me out so I could keep doing what I’m doing. I got to write a lot of my new songs on the new guitar, which a great way to form relationship with it.

What are the important qualities of an acoustic guitar to you?
My biggest thing is the sound. I love guitars that have a warm sound to them. I also like to see how comfortable I am holding the guitar, making sure the guitar fits my body, because I'm pretty small. I find out how I feel when I hold the guitar. This Takamine has that perfect kind of balance of size, and still has that amazing sound.

You play live a lot, both touring and lots of local shows. What makes your Takamine especially good for you as a live performer?
I think that main thing is that it’s always so reliable. With the quality of sound, I've never had an issue. But I really appreciate that I can just plug in and it’s going to sound good. Even on a terrible sound system, I can somehow still get a good sound out of it. That’s a huge relief. I never have to worry about doing extra things to make it sound good.

How old were you when you moved from Kenya to America?
I was 19.

What was the reason for the relocation?
To go to college. I first moved to Chicago. I was going to be a broadcaster, and I was studying communications. To be honest, it was never my favorite thing. I was just following my dad’s dream for my life. It took another decade or so before I realized that I needed to follow my own path and music was the natural path for me.

How did you then end up in Seattle?
It was July 2007, and I was coming here to go to school. Though I had started learning guitar that year and getting better at song writing, it wasn't until 2011 when I finally immersed myself in the Seattle music scene. I must confess, I didn’t know how Seattle was such an important city for music. But when I got really involved in the music community, I realized, “This is the place I was supposed to land.” It’s been a really good home for me, and I've been able to keep doing what I love.

I hear a good deal of African influence in your music, especially in your rhythms, but there are other world music elements, like reggae and blues. Where do you turn to get inspired as a songwriter from a musical perspective?
To be honest, I’ve never been somebody who listens to other people to get inspiration. I've listened to all kinds of music throughout the course of my life, so all types of genres are deeply embedded in me. I feel like blues and reggae lend towards similar themes, often of heartache and social activism. They are genres that carry those emotions really well. I think what happens when I write is that some of these genres that are stored in my subconscious come through when I need to write. 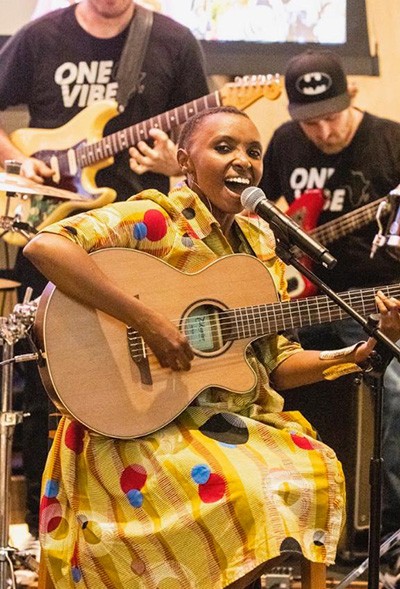 Are you working on new stuff right now? What’s next for you as a songwriter?
I am. The next album I’m working on is going to be a very personal album for me. All the songs are about looking at my life from different angles - personal growth/challenges, motherhood and romance. After I finished writing the album, I noticed that there was a lot of country elements coming coming through.

Really? How cool.
I think so too. I grew up listening to Dolly Parton and in a way I feel like because these songs are so personal, it makes sense that there are country elements seeping through. It’s returning to something really familiar, something that was comforting to me as a kid.

Where are you at with the new album, other than working on new songs?
It’s still in the initial stages. I’m working with an arranger, Néstor Romero Clemente, who I met last year. He had reached out to me because he was a fan of my music and during a layover in Dublin we met up for tea and instantly connected and talked about working together. And I loved his work.

That’s really neat. Your music has a beautiful level of simplicity, so it will be interesting to see what happens with some added instrumentation.
It’s very new for me. We’re going over some of the different concepts right now. Néstor understands that simplicity is still my number-one priority, so we're very mindful of that as we shape the songs. In bringing in somebody else at this early stage, my main thought was, “How can we create an environment around these songs in a way that brings them up even more?” And because they are so personal, we felt that using string instrumentation would serve that purpose.

Great idea.
It was Damien who said, “It would be great to hear an album of you with a quartet.” So yes, we're going to do just that, but still keep it within my authentic sound. I believe there’s something about strings… they have a way of tugging at the heart.

A final question that we like to ask all songwriters. What’s something you do when you get into a creative rut? How do you get inspired to make new music?
I think when I first started out, I’d go through those seasons and hit a rut and be like, "Oh my God, the gift is gone! I need to start looking for a new career!”

Ha ha.
I have some friends who said, “I write a song every day!” I tried that and it was awful. I hated it so much because it felt so unnatural. Like everything in life, I found out there are seasons even for songwriting, and I’ve mapped those out. It takes me a year and half to write new music. In the off-seasons, I do other things, or get out on the road for as long as I can until I’m ready to write my next material. It’s created more space in me to not feel like I need to write every all the time. I've learned to respect the gift, and trust that when I need to write a song, it’s going to come. That’s how I can facilitate the song to come through when it’s ready.

Keep up with Naomi and her music at her web site.