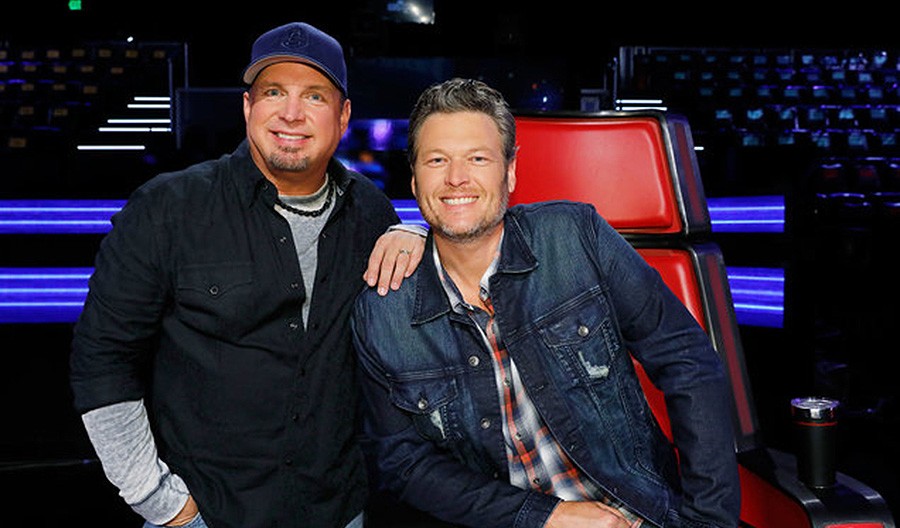 On January 17th 1992, NBC aired a prime time network special featuring a red-hot new country artist named Garth Brooks. That night in Ada, Oklahoma, 16-year-old Blake Shelton was glued to his family TV soaking in every second. Growing up to the soundtrack of Conway Twitty, George Strait, and Earl Thomas Conley, the lanky and talented high school junior had already made up his mind that he was moving to Nashville as soon as he had graduated. Watching Garth tear up Dallas Reunion Arena that night on TV, a previously unrecognized essential to his game plan was driven home – he would be needing a Takamine guitar.

Shelton spent that sweltering summer schlepping shingles and roofing houses until he had the cash to buy himself an EF341SC like the one he’d seen. Check out Blake’s recent twitter message to Garth where he confesses as much.

Eleven hit albums, twenty-four number one singles and sixteen seasons of The Voice later, that same Blake Shelton received a phone call from that same Garth Brooks proposing they collaborate on Garth’s upcoming single "Dive Bar". While the rowdy summer anthem, written by Brooks, Mitch Roselle and Bryan Kennedy, was not originally slated as a duet, Blake's powerful live performance on the CMA Awards of his own single "God's Country" moved Garth and prompted the call.

"I just reached out to him," said Brooks. "He was so sweet on the phone. Last thing I said was 'Hey man, I don’t want to put you on the spot, but we got this song that might be a pretty cool duet.'"

Still very much that stone-country kid from Ada, Blake’s deep-rooted C&W sensibilities followed him into the session. "He was nothing short of fantastic," said Garth. "He kept pushing for more steel guitar, more country."

Garth and Blake will perform the single live for the first time this July 19th during the first of two sold out shows at Albertsons Stadium in Boise, Idaho. Plans to launch a seven city Dive Bar Tour into the heart of Garth’s ongoing (three year) stadium tour have also been announced, fueling speculation as to exactly which “dive bars” Garth has targeted, and if maybe Blake might show up at a few as well.

Garth’s favorite Takamine of late has been a custom “Circle G” prototype featuring his signature lower-case “g” logo suspended in the sound hole via a circle of honeycombed cedar laser-cut into the solid top. And while the remarkably big sounding prototype built almost five years ago may never become a regular Garth model, it seems to have found its time and place on this particular tour. Aside from the three original prototypes, only ten additional “Circle G” guitars have been built, all of which were reserved for the tour. Of course, Garth’s traditional Signature Model GB7C remains in the mix.

The Takamine model most associated with Blake these days is the whiskey brown P5DC-WB dreadnought cutaway with solid spruce top, solid rosewood back and rosewood sides from Takamine’s Pro Series 5. Blake can also be seen playing an old favorite TAN15C from time to time.

“Dive Bar” can currently be heard only at radio until it begins streaming at Amazon July 15th.