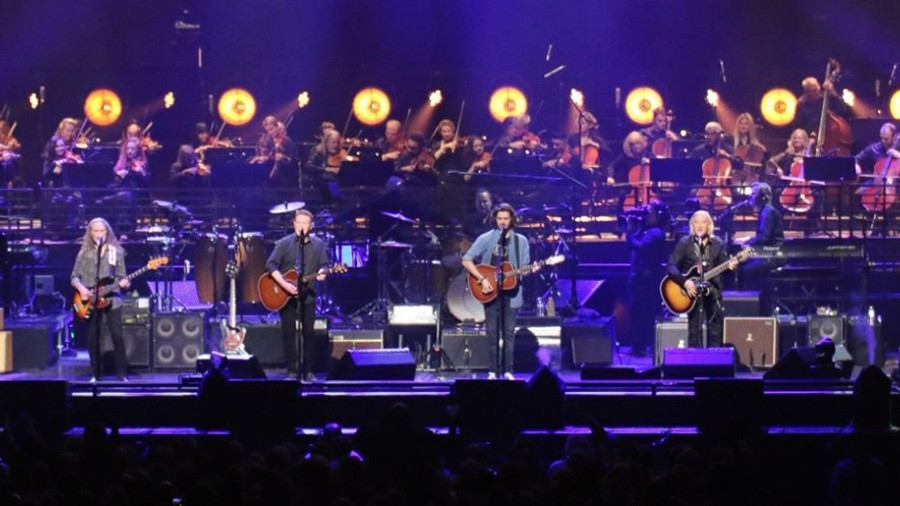 The legendary rock/country rock band Eagles will play their classic 1976 album Hotel California in its entirety during a 2020 North American tour – and as usual, Takamine Guitars will be prominent in the mix.

The 2020 tour comes after the band performed three sold-out Hotel California gigs this summer in Las Vegas, marking the first time they’ve ever performed the album live in its entirety. The performance featured the Eagles current lineup — Don Henley, Joe Walsh and Timothy B. Schmit, with Deacon Frey and Vince Gill — alongside a 46-piece orchestra and a 22-voice choir.

While Eagles' longstanding history with Takamine may be common knowledge, including Glenn Frey’s introduction of Takamine’s Palathetic Pickup to the industry back in the early '80s, a lesser known piece of Eagles/Tak trivia dates well before the advent of those game-changing electronics… and happens to relate directly to this tour. The acoustic guitar used by Don Felder at Criteria Studios in 1976 to record the iconic 12-string intro to the song "Hotel California" was a Takamine. In a 2017 interview with Guitar World, Felder explains:

“The acoustic guitar in the intro is a Takamine 12-string with a DeArmond pickup. We mic’d the acoustic and put that in the center of the mix. Then we took the pickup’s output and ran it though an Echoplex and a Leslie. We mic’d that in stereo so it has this left-to-right kind of swirling, ethereal characteristic. It’s blended in with the direct acoustic as well."

As further evidence of the role pre-piezo Takamine guitars played in early Eagles performances, check out this stunningly perfect, circa 1977 live take of the album’s first single, "New Kid in Town". Yes, that’s a Takamine F360S Glenn is playing, equipped with the same DeArmond sound-hole pickup Felder describes in the setup of the Takamine 12-string F400S used in the recording of "Hotel California".

Back to present day Eagles - after joining the band in 2017, Deacon Frey mostly played his dad’s iconic EF360S (the guitar Glenn referred to as #1 and served as template for his EF360GF signature model) as well as Glenn’s EF400SC 12-string. More recently, Deacon has turned to a TF77-PT from Takamine’s Legacy Series as his primary 6-string. Don Henley, now playing guitar as often as drums, rotates between his 15-year-old Takamine EF261SAN and a TF77-PT acquired in Nashville and played extensively by guitarist Stuart Smith throughout the recording of Henley’s gorgeously retro solo album Cass County. When it comes to Joe Walsh, he is particularly fond of his P6JC-12 when going acoustic.

The 2020 Hotel California tour kicks off with a two-night stand at the State Farm Arena in Atlanta, Georgia on February 7th and 8th. The band will then play two shows each in New York City, Dallas, Houston and San Francisco before wrapping April 17th and 18th at the Forum in Los Angeles. Complete information is available at Eagles.com.

Since I obviously wont get to attend any of their concerts in 2020,  I will buy the DVD/Bluray and appreciate the Eagles and their awesome Taks.

Try and see them. It's a fun show.