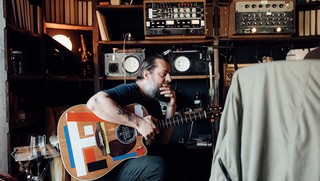 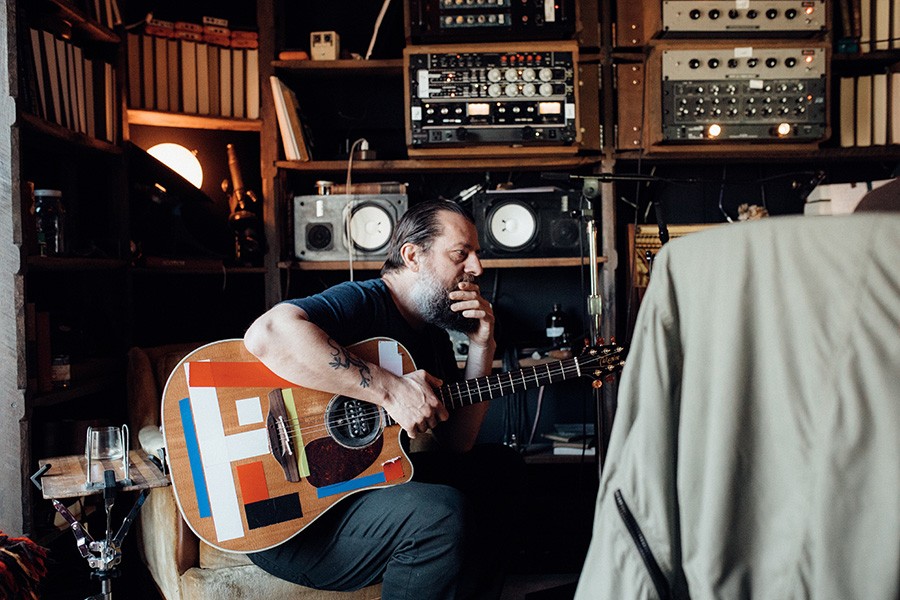 Like many members of the Takamine artist family lately, indie folk singer-songwriter Sean Rowe was keeping himself quarantined during the COVID-19 pandemic when we spoke via phone on a Friday afternoon. Remaining socially distant in a physical sense but staying intimate and personal via music is something that everyone seems to be figuring out at the moment.

First off, and most importantly, how are you holding up through this craziness?
I think it’s a challenge for musicians who count on live performances as their main source of income and financial support. Like many performers, I’ve had to cancel all of my shows and took a big financial hit in that regard. Before the virus, I happen to have set up live-streaming capability in my house and I’m so glad I did that. Once we were quarantined, it was a no-brainer to start doing these kinds of concerts live from my home.

We want to talk about that some more, but first we want to hear the story of the guitar you call "Sydney 3", the Takamine with multi-colored duct tape that is so closely associated with you.
My first Takamine was the EAN10C. I got that when I was maybe 22 years old. Before that, I don’t remember what I was playing. I think maybe a cheap Yamaha or something. I was in a music store called “New Music” in upstate New York and I was asking the owner, a short karate expert with a mullet named Nino, if he could help me to get this particular acoustic guitar down from the high hanging tier. I remember that experience so well.

What were your very first impressions of it?
I thought it looked cool. It had that faded cedar look. As soon as I played it, though, the first sound picture that came into my head was that of an upright bass. There was something about the way it resonated, and that resonation in the body really struck me. You know when you’re next to an upright bass, and you can feel the whole body resonate? It was like that. A very full rich sound. What also stood apart was when I plugged it in. The piezo pickup inside was the best I had heard in an acoustic/electric guitar. It seemed to capture the most natural sound compared to other models in my opinion.

Yeah, for sure.
I also liked this one feature of the guitar. It seems like such a simple thing, but in terms of the screws for the straps, I liked having two of them on the guitar, one on the input jack and the other on the body. I never liked the feel of having the strap run through the head stock like in other classic acoustic guitars. Actually, there was another particular feature I liked, which was being able to put the strings through the back of the bridge instead of having to use bridge pins. And overall, on a more general basis, I liked the way it felt and the action of it. All of those things came together, and I realized right then that it was an amazing guitar. 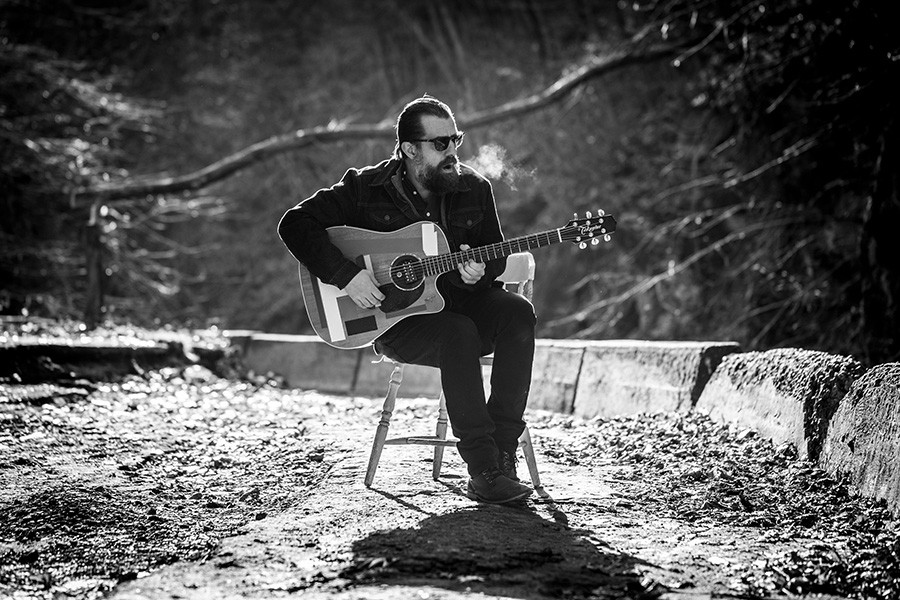 And the duct tape?
Once I started playing that model and essentially building a relationship with it, I became so accustomed to the feel I really didn’t want to perform with anything else. Over the years, I’d developed the style of playing that was really percussive, pounding on the body and keeping a bass drum beat while handling the melodic lines with my left hand. I also strum a lot on the neck rather than near the bridge which sounds very different. That was partly due to the fact I wanted to bring the sound of out of the guitar like it was a whole band, rather than one guy playing solo. And I think I got the sound I was hearing in my head but by playing the way that I did, I ended up really denting the cedar body and creating holes in the thing. Eventually I was worried the size of the crater it was making in the guitar, thinking, “Will this fall apart on me someday?” So one day, I was about to go on tour, and I got a piece of silver duct tape and covered up that hole. I looked at the guitar and then stood back a bit and looked at it some more, and thought, “It needs to be a little prettier than that.” I went to the hardware store, and got different colored duct tape and started putting in various spots, here and there, until I thought, “That looks right.”

You’ve gone through a couple of them at this point, right?
Yeah. I don’t think that original model is made anymore, but I have a couple that are similar in feel. I can tell you that the pickups seem like they keep getting better.

Speaking of pickups, you’ve also done some mods on your Takamine that make your sound very unique, like putting a humbucker electric guitar pickup in the sound hole. What’s the story with that?
I wanted a definite electric sound along with the acoustic sound of the guitar. I’d been taking the output on the guitar and splitting it, sending one to an amp, and one to the board. I did that for awhile, but the distortion would really rock the monitors. I was in a local music store called Collar City Guitars one day, and I said to Peter Fisher, the owner, “What can we do to get this guitar to sound more electric?” and he said, “Why don’t we put an electric pickup in the sound hole?” End of story. It was a different guitar from that day forward. From Tony Stark to Iron Man.

Fair enough. Anything else you do to personalize your tones?
Yeah. I use heavy gauge, flatwound electric guitar strings on it, and it sounds great. It sounds really good acoustically but I happen to really like the sound of dead, dull strings. I get those two sounds I want at one time. It would be awesome if they came out with a signature guitar that had all that stuff already built in to it. Wink, wink Takamine!

At some point, you picked up one of the newer Takamine Thermal Top guitars. What’s been your experience with it?
I like it a lot. The feel is really good, and I think its comparable to the other models I’ve played. It’s a bit shiner than my last one but it doesn't play any less smooth. I really haven’t played a bad Tak. They are just the most dependable on the road, and for the money, they’re affordable. They’re just what I want to play. 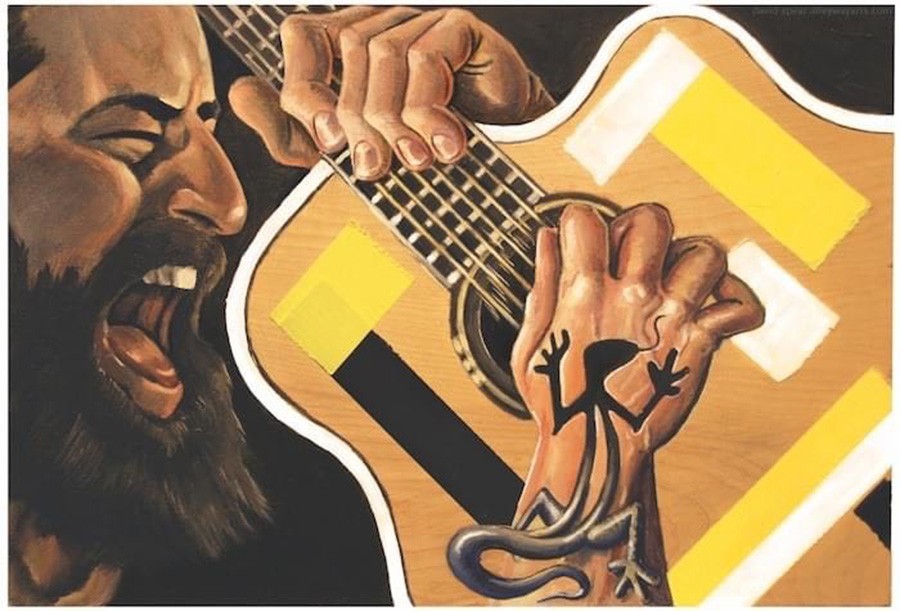 We talked about the look and feel of your guitars, and a little about the tones you’re going after. What do you prioritize in looking at a new guitar between its sound, its feel, or its aesthetic vibe?
Well, I mean, it is a combination of all those things. If I had to choose between the look and the way it sounded, I’d choose the sound. The look is relative, but with the sound and feel, you pick it up and sit down with it, and you know right away. You know when it’s just right for you.

Have you ever picked up a guitar and suddenly found yourself inspired to write because of the sound or the feel of that specific instrument?
All the time. That’s how most of my songs are written, musically speaking. A lot of times, they’re written by accident. My song "Jonathan" from the record Magic was written on my first Tak. I tuned the low E-string down to an A and with that cedar body the whole sound swelled and resonated. I’m not sure if that song would have come out using a different guitar.

From Pete Seeger to Bob Dylan to John Prine to Leonard Cohen and many more, folk musicians have long been a voice of the people. How do you address a world where for some folks, it feels like everything is rapidly falling apart?
Well, I think there’s a lot of truth to what you’re saying in how things unravel. It’s natural for people to go a little into survival mode, and in those times, musicians have to wear a lot more hats. Being stuck at home, but you have to make a living, and not a lot of people can help with that. But there’s a lot to be inspired about, like being in touch with your family life more than ever before. And above and beyond everything else going on, there are the troubles of just being human in this world… politically, economically, all that stuff. So there’s no shortage of material. Personally speaking, I’m not a writer that can write in the midst of chaos. I need the right headspace. But I know when this is said and done, there’s gonna be good songs down the road. 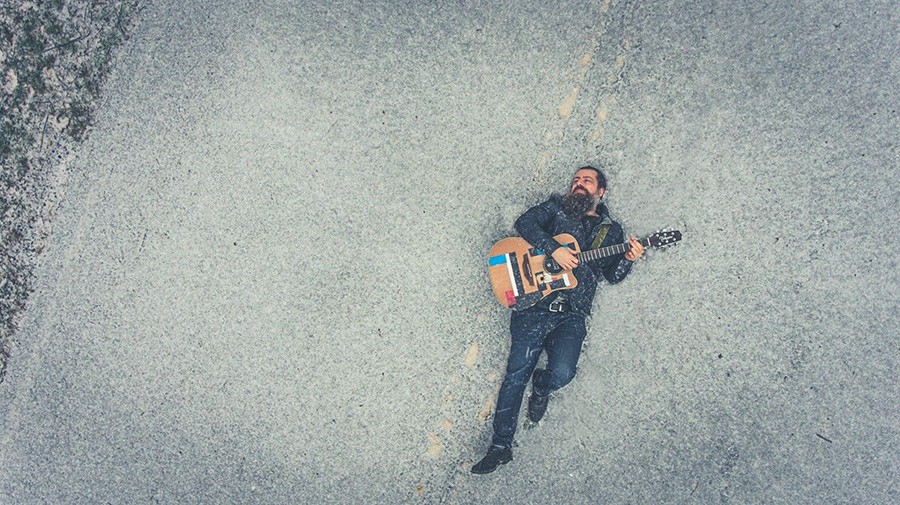 Who were some of your big influences as a songwriter?
Dylan. When I first started writing songs, Dylan was one of the main influences. It’s pretty incredible how deep that influence runs, no matter what generation you are from. It has to be part of your lexicon. So Dylan first, but when I got into Dylan, I got sidetracked by Leonard Cohen and got swallowed by the black hole of his music. Definitely Neil Young, in terms of big influences. John Prine was a lot later for me. But in general regarding folk music, I was more into the heady stuff, and less into the kumbaya thing. I was definitely more into the darker Dylan side of folk music than I was into the Peter, Paul and Mary side.

This may be a weird question given that there’s so much uncertainty in the air now, but I do want to know what’s coming next for you, musically.
Part of what’s happening is that I have a record that was recorded last May in Wisconsin. It was up in the air as to who was going to put the record out, and that part of things is still not ironed out yet. But there is a record coming.

Last question. We talk to people pretty often who say things like, “How do you write a song? I like playing guitar and I admire songwriters, but I don’t know how to go about doing it.” They literally don’t know where to start. Any advice for them?
I would say that it’s not just listening to a song and emulating it. You can go deeper. What I’d advise is to find a song that you feel strongly about. Maybe you never really thought about why it hits you; you just know you love it. Then sit down and really think about it. What part of the song really rocks you? Why do you feel that way? What kinds of images does it bring to your head. Then I suggest really looking at the words on paper. Get a sense for what the writer was able to convey within the relatively short time span of a song. Getting in touch with that stuff is what it’s all about. That’s where you start. Be reflective about the specific things you love about song, and go from there.

Learn more about Sean and hear his music at his web site.