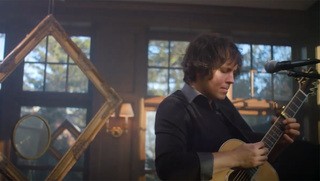 When Takamine player Jake Allen sent over the video for his extraordinary new song "Prague 6", we wanted to get some extra details which we're happy to share with you below.

What’s the significance of this piece’s title “Prague 6”, and what’s the general backstory of the creation of this song?
I was on a bit of a backpacking trip across Europe and visited Prague. One thing I love to do while traveling is find acoustically interesting spots to write music in. Being in this gem of European architecture I figured I would take my guitar and go seek out an inspiring spot to write. I was hunting for a Sistine Chapel type of building when it started to downpour. I ducked into the first building somebody was walking out of which ended up being an old dingy apartment building. It wasn’t nearly what I was looking for aesthetic-wise but the building's stairwell was a nice reverberant space and a shelter from the rain. I pulled out my guitar and spent a few hours penning away at this tune. The lyrics were driven by some issues that were unfolding back home in the states. The only way I could deal with them at the time was in this therapeutic format of writing. A few hours and several confused apartment tenants later, I walked out with this completed song. I named it after the neighborhood where I sheltered myself from the rain to write it.

“Prague 6” seems to encapsulate many of the performance techniques that people admire about you, from tapping to percussive playing to creative use of loopers. Is that something you purposefully do when creating a new song — drawing on your unique skills as a guitarist?
Those types of techniques aren’t necessarily things I purposely aim for. I’m just constantly experimenting with my guitar and chasing certain moods and sometimes it comes out in that percussive style. When it comes to looping, I’m usually using that tool as a way to compensate for not having a band playing with me. Through doing it that way though, the looping has become a kind of an appeal of its own. I will say that with this new album I did try to write more songs that could stand on their ground when performed with just my guitar and my voice. I’m a production nerd and multi-instrumentalist so my albums usually sound really fleshed out. Trying to translate those big productions into a solo show can be tricky so this time I was more careful to make sure that could happen more easily.

You’re playing the Takamine CP7MO TT in this video. What in particular about that guitar made it right for this song?
I absolutely love the neck of that guitar for tapping. It’s a little wider than my other Takamine's necks so my fingers have a little more wiggle room. It’s just a really comfortable playing guitar to me. On top of that, I love the thermal top and how it gives the guitar that really deep tone like it’s been around for a hundred years. That paired with its Palathetic pickup is a recipe for great tone. I’ve fallen in love with most of the Takamine Thermal Tops I’ve played really. They just have a magic about them.

You actually seem to be getting some overdriven effects as you play the lead toward the end of the song, which is unusual with typical acoustic guitar performances. Do you consciously try and seek new tones for each song you do?
I often try to have a solid overdrive tone on hand in my solo shows. The lead tone in this video is coming from a Fulltone OCD along with some other compression and EQ settings on my Line 6 Helix. The cool thing about the Palathetic pickups in the Takamines is that they handle effects, even overdrives and distortion, with the ease of an electric guitar. Since the pickup is built deep into the guitar, it’s easy to avoid feedback where other acoustic would go crazy. I’ve fallen in love with some of the overdriven tones I’ve been getting with my acoustics lately, so much that I’ve actually used acoustics for a lot of lead guitar parts on this new record. There’s a beef and snap to those sounds that I found really cool on the demos so I kept a lot of those tones for the final tracks.

How has COVID-19 and the resulting societal changes affected you as a creative musician and performer?
I think everybody has had varying degrees of wind knocked out of their sails with the pandemic happening. It’s definitely made me and other performing musicians have to be creative in ways that we connect with our audiences. I’ve found a silver lining in the whole thing through doing live streamed performances. I do them every Monday and Wednesday at 8pm EST on my Facebook page. There’s something really unifying about that way of performing. The banter back and fourth with the audience, people requesting songs, things like that, they make it totally different experience than you’d have at a live venue. I really enjoy it and my audience seems to really like it as well. It stirs up a lot of positivity and we all need a whole lot of that right now. I think it’s important for musicians to be beacons of light in this whole situation. We’ve always been crafty on how to make ends meet so I think we’ll be okay there. I just hope we can all do our job of bringing joy to others really well right now.

What’s coming up next for you musically that we have to look forward to?
In spite of my European tour and now likely my U.S. tour being postponed, I still have a new album coming out this year which I’m looking forward to sharing. "Prague 6" is one of the twelve songs on it. I wrote the bulk of the album at an art incubator in Lithuania amidst a year of heavy touring to new places I’d never been before. I feel like the final product is a nice step forward. I’m currently building content for its release which is slightly delayed but I still expect to drop the record in the summer. Aside from that, I’m looking forward to whenever I can get back out there and start playing again in the flesh. Until then, my live streams are seeming to be a nice alternative.

Catch one of Jake's livestream shows via his Facebook page.