Chayce Beckham needed a new acoustic. The 24-year-old Apple Valley, CA native had landed an American Idol contestant slot and needed a first-class six-string to accompany his performance. Up until that point, he'd been a heavy equipment operator who just happened to play music. But things were going well and that dynamic was clearly flipping. So Chayce decided to go guitar shopping at Guitar Center['s flagship store in Hollywood.

Armed with a discerning ear and a straight edge to check action and neck angles, Beckham auditioned numerous guitars of various makes and models before finally spotting it... a noticeably darker spruce-topped dreadnought cutaway perched high on the wall, well out of reach. “Can I try that one?” he asked. The guitar was lowered to floor level, and Beckham was introduced to the Takamine EF360SC TT.

Even from a distance, the darker thermal-topped beauty with rosewood back and sides from Takamine’s popular TT Series just looked like it would sound warmer. Takamine’s heat-treated Thermal Tops darken in the process, just as a naturally-aged spruce top would. But looking warm is one thing. Chayce pick-strummed a fat E chord… and there it was. He thought, “Wow, okay, I’ll plug it in and if the line-out sounds like this, this guitar is mine.” It did… and it was. 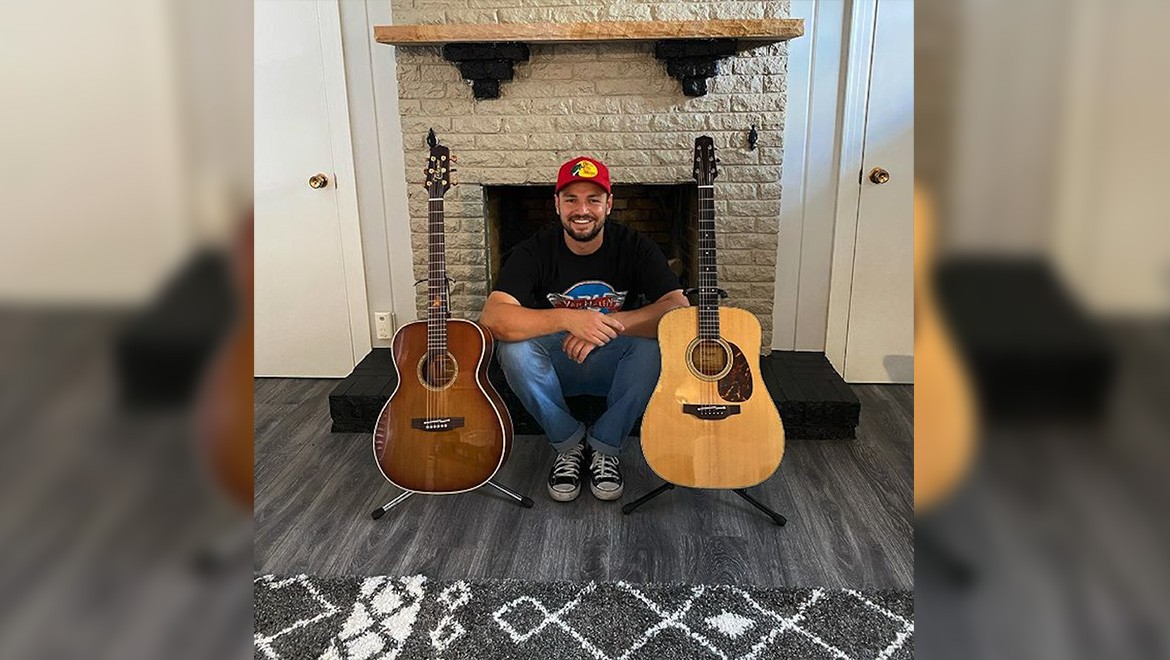 Chayce Beckham at home with his new Takamine TF77-PT and EF360S TT.

For every episode of American Idol that followed, Chayce Beckham and his EF360SC TT were a performance team, looking and sounding as though they had been together forever. The new Takamine had become his old favorite.

Things began moving even quicker on the show. As a finalist, Chayce had been asked to record an original song for the competition. He had been writing songs since he was a kid, so he had a few to choose from. But one of his more recent stood out. Beckham had written an autobiographical song titled "23" a few months earlier, not long before a near-fatal car crash cast the close-to-home lyric about his alcohol abuse in an eerily prophetic light.

Now I'm 23 and there ain't nobody who can drink like me
Soon I'll be 24 and the Lord knows that I can't drink no more
I know I shoulda taken it slow
It's not the way that my life goes
Lord, I know
When you're passed out on the floor
You're sober by 24

The crash took Chayce down and nearly out. It was during his recovery at home that his stepdad attempted once again to convince him to audition for American Idol. “He and my mom had been bugging me about it for years,” said the humbled Beckham. “They could see it. I couldn’t." He finally gave in and auditioned in February of 2021.

So how did it all turn out? Well, his song "23" shot to number one on iTunes, and Chayce Beckham went on to win American Idol and develop a massive fan base in the process, including the folks at Takamine Guitars. He has since landed a recording contract, secured top-tier management, moved to Nashville, and is surrounded by the same family and friends he credits for his deliverance. He has also added a TF77-PT and EF360S TT to his touring stable of Takamine Guitars. Look for Chayce Beckham on select tour dates this summer with 3 Doors Down, and keep up with him on his Instagram.

I love your music! Keep up the good work... hedge trimming cambridge

Takamine’s heat-treated Thermal Tops darken in the process, just as a naturally-aged spruce top would Popcorn Ceiling Removal in Chicago, Il. But looking warm is one thing.

But things were going well and that dynamic was clearly flipping drywall company.

This type of message always inspiring and I prefer to read quality content, so happy to find a good place for many here in the post, the writing is just great, thanks for the post.