Jenee Fleenor Three-Peats as CMA "Musician of the Year"

Jenee Fleenor Three-Peats as CMA "Musician of the Year"

When the three-year-old Jenee Fleenor's classical violin instructor advised her parents that their daughter was most assuredly gifted and they might consider guiding her towards a musical career, her mother envisioned New York City and Juilliard. But it was her father’s Bob Wills, Ray Price, Merle Haggard and Willie Nelson records that spoke to the prodigious child. And so it is that one of Jenee’s earliest memories of anything resembling a recital was standing on her family’s cedar chest at age five and performing for her parents - not Beethoven, Bach or Brahms - but Bob Wills’ "Faded Love" and thinking to herself, “I can play anything I want on this thing."

Lucky for us -- and not so much for the classical music world -- as soon as she graduated from her Springdale, Arkansas high school, Jenee pointed her possession-packed ’91 cherry-red Chevy Lumina eastward towards Tennessee with dreams of being a real live Music Row session player in the sacred tradition of her session player heroes. 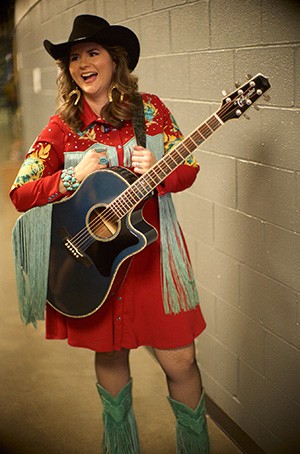 As is still the case in Music City, the large majority of gifted musicians who make their way to town, usually the best of the best from their hometown or state, seldom count among the rarified few who become session players, or land their own recording deal. Instead, they ply their impressive skills on the tour circuit, spending most of their time on a bus and their few hours on stage, replicating the artist’s records, note for note.

At age 18, after just two weeks in town, Jenee landed her first touring job with country and bluegrass singer-songwriter Larry Cordle. She would go on to tour with Terri Clark, Martina McBride, and Blake Shelton (now eight years and counting). But it was a call from traditional country artist Jon Pardi, asking Jenee to play fiddle on his record (and to let loose when she did) that revealed the fierce, gutsy, confident style that other artists and producers suddenly wanted on their records.

Hundreds of recordings and thousands of studio hours later, the busier-than-ever Fleenor still chooses to split her time between session work and touring (with Blake), and she still finds herself on stage playing some hit song exactly as recorded by some session player. But now, the hot-shot Nashville Cat whose lick she’s nicking may well be herself.

So we weren’t surprised when, in 2019, Jenee Fleenor became the first female recipient of the prestigious CMA Musician of the Year award, an honor first awarded to Chet Atkins in 1967. We weren't shocked when she earned the accolade again in 2020. When she took home the coveted honor a third time at last week’s 2021 CMA Awards, even her fellow nominees conceded that the sweet, gifted girl from Springdale was undeniably deserving.

Known primarily for her fiddle work, Fleenor estimates that 80% of her work with Blake calls for acoustic guitar. A Takamine player for the last 12 years, the model she’s most associated with has been the EF450C-TT from Takamine’s popular Thermal Top series. But the acoustic she chose for her CMA performance of Blake’s new single "Come Back as a Country Boy" was Takamine’s blue Limited Edition Series masterpiece, the LTD2021. The exquisite, slope-shouldered stunner that plays and sounds even better than it looks provoked lots of oohs and aahs backstage from bands and crew alike along, with speculation as to what Takamine may have in store for the upcoming LTD2022.

The exquisite, slope-shouldered stunner that plays and sounds even better than it looks provoked lots of oohs and aahs backstage from bands and crew Interior Painting in San Francisco, CA alike along.

Instead, they ply their impressive skills on the tour circuit, spending most of their time on a bus and their few hours on stage, replicating the artist’s records, foundation contractor note for note.

Jenee Fleenor has the best voice when it comes to acoustic playing. Emergency Towing

We at Modesto Concrete Contractors and Palmdale Junk removal congratulate you and wishing you all the success.

Phenomenal. Congratulations Ms. Jenee for catching your third sequential CMA "Artist of the Year" grant. You merit it | Your so beautiful and talented have this Microblading eyebrows Liverpool