As Kenny Chesney prepares for his 16th headlining concert tour in support of his 19th studio album, we at Takamine can’t help but look back and wax a little nostalgic.

It was 1994 when the 26-year-old Chesney, fresh from his hometown of Knoxville, was introduced to Takamine Guitars in Nashville. Kenny had just signed to indie label Capricorn Records and was in need of a good live acoustic guitar. Our mutual friend Billy Craven knew just whose number to call, and Kenny would soon own his first Takamine... an EF360SC (similar to the current P5DC), and play it in his first video, "That's All I Need to Know".

But it was the sweet little short-run, spruce top, Koa back-and-sides Takamine New Yorker FP317S that really hit home with Chesney. Better suited in terms of tight tone and size, this guitar would appear in the video for Kenny’s first #1 song "She's Got It All", and then again in the game changing "No Shoes No Shirt No Problems".

The "No Shoes" video would launch Kenny’s career into rarified orbit, and redefine Kenny’s Takamine from the familiar, all-purpose stage and video guitar into Chesney’s personal, everyday play-favorite, known from that point forward as, “The Boat Guitar”.

With the older model now on permanent spring break, Tak models like the EF261SBL would step in as Kenny’s stage guitar. But the OM bodied EAN70 (similar to the current P3MC) with its clear voice and cedar-satin suntanned look quickly became the now famous beach-bum’s new #1. Soon Kenny was customizing his EAN70 with personalized tiki artwork, effectively expressing his tropical lifestyle while inadvertently laying groundwork for what would become the KC70, the most personalized of the five models in Takamine’s acclaimed Signature Series. 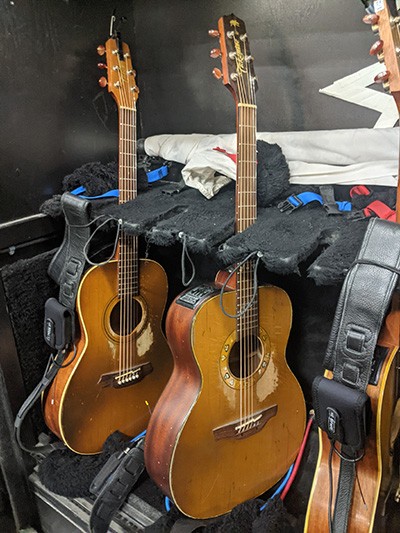 As is the case with every hand-crafted instrument born of Takamine’s world-class factory in Nakatsugawa, the primary statement made by the KC70 was not by way of showy inlays or aesthetics, but rather the instrument’s unique ability to deliver clear and true acoustic tone to every single seat in any given sold-out concert arena or stadium – a requirement that sent most acoustic-electric guitar brands slinking away in shame, but had become an unspoken staple to the club-dog Chesney, who now enjoyed performing solo-acoustic sets with his Tak for intimate gatherings of 80,000.

A few tours ago, Kenny’s original, well-played, fun-stained EF317S made its way back from the boat and onto the stage, granting the road-worn KC70 its own hiatus of well-earned beach time.

Now, for this 2022 Here and Now Tour, both guitars stand side-by-side in Kenny’s rack. They're tanned, tuned and ready to sing their bouts off. Each of these two outstanding guitars reflect the contributions, individual and collective, to the nearly 30-year career of one of the most successful American crossover artists, and nicest guys of all time.

I'm glad that you have shared his website. I can't wait to look forward his upcoming tours.