Listening to eX, the latest album from power duo Williams Honor, one can’t help but reflect upon of the massive talent pool we’ve come to associate with the relatively tiny state of New Jersey. Considering the cast of musical icons that include Sarah Vaughn, Count Basie, Frank Sinatra, Paul Simon, Jon Bon Jovi, Whitney Houston, Bill Evans, Al Di Meola, and Bruce Springsteen (to name a precious few), one has to wonder if there’s something special in the great Garden State’s water. 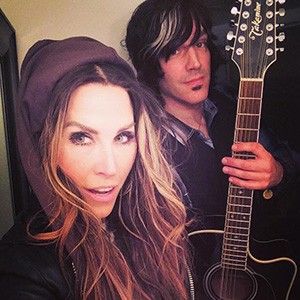 We could try to describe how Reagan Richards’ captivating vocals, Gordon Brown’s well-honed production and performance skills, and shared songwriting prowess has somehow created the genre-bending, 14-song jewel that is eX, or we could just show you where to get it.

Gordon Brown and Takamine go back decades, and his connection to the brand is strong. In fact, few guitarists are as closely associated with a particular brand or model as is Brown with his EF381SC 12-string from Takamine’s iconic Legacy Series.

"There isn't any artist, tour, writing or recording session where my Takamine twelve isn't my first grab," says Brown. "It accompanies me everywhere I go and is always the blueprint mechanism for anything I'm working on. From my first record, Mr. Reality in 1992 (produced by Danny Kortchmar) to my current project, Williams Honor, the big and balanced sound of the EF381SC has been the cornerstone. I cherish the sound of that guitar."

To add still another dimension of Tak-sonics to the mix, Williams Honor guitarist, Scott Bradoka recently acquired the cedar-topped, satin-finished P3NY New Yorker from Takamine’s popular Pro Series 3 which quickly sang its way into Bradoka’s heart. “I love, love, love this guitar,” Scott exclaimed in a recent email to Takamine.

So here’s to the generously-gifted Regan Richards, Gordon Brown and Scott Bradoka of Williams Honor. Everyone at Takamine Guitars is proud to play a role in the sharing of those gifts -- particularly the dedicated men and women at the factory in who employ their own brand of magic in the handcrafting of each and every one of those instruments.