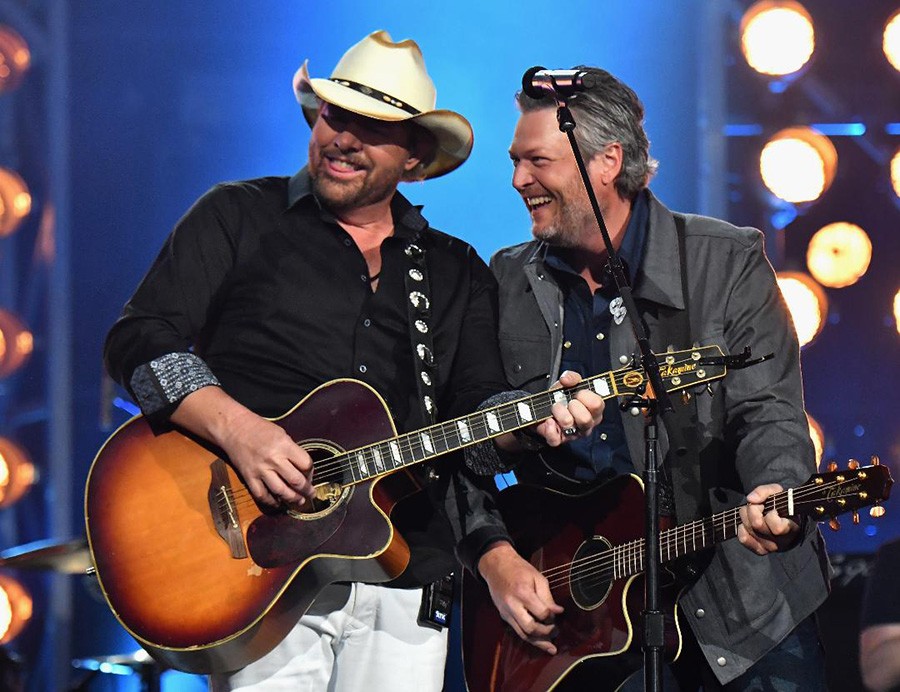 "It's no secret that I like to have a good time," Blake Shelton said while introducing his duet with fellow hit maker Toby Keith, "so I guess I'm the perfect match for this next artist."

The two longtime friends of Takamine then proceeded to prove Shelton’s point by performing Toby’s rollicking debut #1 single “I Should’ve Been a Cowboy” while the packed venue at the 53rd Annual Academy of Country Music Awards sang every word and basked in the sheer fun the two fellow Oklahomans were having.

Appropriately enough, the career-breaking “Cowboy” was written in a motel bathroom in Dodge City. Some of Toby’s buddies had invited him on a hunting trip in Kansas. Still wearing their camo, they walked into a Dodge City Bar and one of the guys in Toby’s party asked a pretty cowgirl to dance. After he was thoroughly rejected, Toby recalled what happened next.

“She guns him down and we all make fun of the poor guy as he comes back to the table. Just then a young buck in a cowboy hat swoops in and takes her to the floor. One of us turned and said, 'John, you should’ve been a cowboy.’ I thought, 'Well, I have to write that.'"

The single, released on Feb. 12, 1993 from his self-titled album, launched Toby’s career and became one of the most-played country songs of the decade. Keith always plays it at live performances, but with its 25th anniversary, it takes center stage during the Should've Been A Cowboy Tour XXV.

Toby has played Takamine from day one of his career, as evidenced by the well- worn EN10 he plays in that original 1993 “Should’ve Been a Cowboy” video. After playing the EF341SC for many years, Toby switched to the maple jumbo sunburst EF250SMCSB (now the P6JC-BSB) which became the basis for his signature model EF250TK, which was introduced in 2012. You can learn more on the development of that model in our Signature Stories / Toby Keith article.

How does the member of the Songwriters Hall of Fame feel about the 25th Anniversary of his first hit?

“It was a good first song.”