There are no Takamine guitars in this video. Not one. Surprisingly, there’s not much of any acoustic guitar to be seen anywhere.

What this video does feature is the timeless and absolutely original voice of the great John Anderson delivering a brand new, honest-to-goodness country duet with Blake Shelton called "Tuesday I'll Be Gone", a song that feels like a visit from an old friend.

If you find yourself turning up classic country tunes like “Straight Tequila Night”, “Seminole Wind”, and “Swingin'”, and soaking-up this new duet like a dry sponge, then you’ve probably missed John Anderson’s voice too. Anderson comes back around by way of Blake drafting him along with other “friends and heroes” Tracy Lawrence, The Bellamy Brothers and Laura Alaina for his 2019 tour. 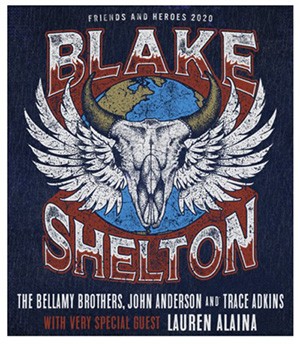 Thus was born the Friends and Heroes Tour. It was such a blast for all involved that Blake decided to fire up 2020 by taking up right where they left off, doing so with this delicious duet with Anderson. That’s very good news for deep-rooted country fans everywhere. The tour began February 13 in Portland and is weaving its way throughout the US for 16 stops including the Tacoma Dome, Allstate Arena in Chicago and the Forum in L.A. See the complete itinerary here.

In other Blake-related news, he and the lovely Gwen Stefani performed their new duet "Nobody But You" live for an intimate audience of 10 million at the 62nd Annual Grammy Awards. Blake played his vintage Tak TAN15C, and the reigning CMA Musician of the Year Jenee Fleenor employed her EF450C TT from Takamine’s celebrated Thermal Top Series.

I think you’ve made some truly interesting points.

I have not hearded about him for a while. Thanks from bringing him back to my attention.