Kelly McGrath Opens for The Stones

Kelly McGrath Opens for The Stones 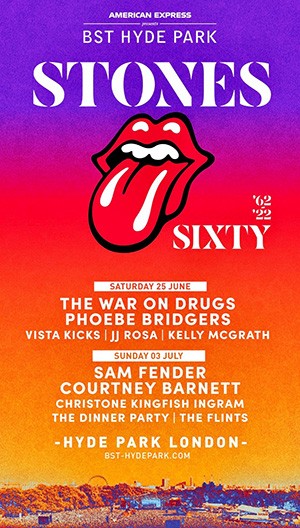 It had been a while since we'd been in touch with long-time friend, singer/songwriter Kelly McGrath. A pandemic, some cancelled tours, and other viral distractions had kept us from running into each other in the usual places. "What’s new?” we asked.

“I’m a mom!” she said excitedly, virtually introducing us to her husband and soon-to-be two-year old daughter. We’d known Kelly as a typically upbeat and optimistic soul, but never quite as radiant as when she showed the photo and spoke of her beautiful Juliana.

“And your music?” we inquired.

“Oh yeah,” she said. “I’m opening for the Stones in Hyde Park for their 60th Anniversary tour.”

Well, that's kind of a big deal, but we weren’t all that surprised either. Kelly and her band had played London’s Hyde Park in support of Steve Winwood, Santana and Eric Clapton back in 2018. Still, hearing of this repeat invitation served to remind us of the level of talent we were dealing with.

McGrath had met Mick Jagger in 2015 when introduced to The Rolling Stones band members by Bernard Fowler, a dear friend and music colleague of Kelly’s who just happened to be longtime background singer for the Stones. A short time later, when Mick came to Nashville on a writing trip, Kelly was invited to join a private gathering and asked to bring a guitar where they each played, sharing songs they had recently written. Mick quickly recognized Kelly’s talent, and publicly endorsed her 2017 single “All That I Want” on Twitter with a congratulatory tweet.

Kelly continued to cross paths with The Rolling Stones on simultaneous European tours, each time reconnecting and trading details about shows and venues, as road dogs do. So when Jagger learned that Kelly McGrath had been secured as one of the Stone’s Hyde Park opening acts, he was particularly pleased.

Kelly has seldom performed without her acoustic guitar, and for the last 17 years, that guitar has been a Takamine. Dating back to her original model EG523SC, which she finally retired for a TAN45C, for the last four years Kelly has been using the EF508KC from Takamine’s s iconic Legacy Series. For this special gig, Kelly picked out a special guitar: the P6NC from Takamine’s maple back-and-sided Pro Series 6. It is this sweet-sounding sunburst cutaway that has most recently stolen her heart and will be accompanying her on London’s Hyde Park stage on Saturday, June 25th.

The P6NC has everything an artist like Kelly needs to make the most of a rather big show. It's a singer's delight, combining the power of a dreadnought with balanced tone that perfectly complements the vocal range. It features a resonant solid spruce top with scalloped "X" top bracing for superior balance and articulation, a solid flame maple back and flame maple sides, a convenient Venetian cutaway for easy access to the upper reaches of the fingerboard, and elegant body binding with black and white purfling and mother-of-pearl rosette. Take all that and add Takamine's proprietary CTP-3 Cool Tube preamp system paired with the unique Palathetic under-saddle pickup for peerless amplified response, and you're ready to command the attention of some 65,000 of your closest friends at a beautiful outdoor venue like Hyde Park.

All of us at Takamine send our best wishes for a great show to the talented Kelly McGrath!